Prime Minister of Ukraine Oleksiy Honcharuk tackled deepening cooperation between Ukraine and the European Union with President of the European Council Charles Michel during a working visit to Brussels, the Kingdom of Belgium, to chair the sixth meeting of the EU-Ukraine Association Council. The Head of Ukrainian Government expressed gratitude for the unwavering support by the European Union of the sovereignty and territorial integrity of Ukraine and noted the importance of a European Commission’s decision to extend sanctions related to the so-called "elections" in the temporarily occupied Crimea. 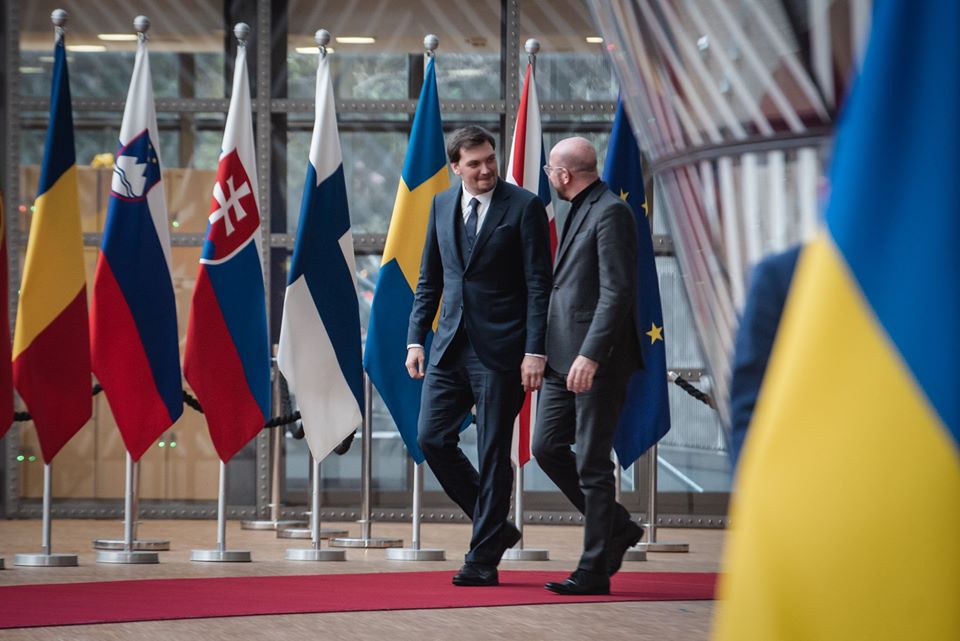 Oleksiy Honcharuk also stressed: "It is vital for Ukraine to remain among the mainstream issues on the EU agenda. The peaceful settlement of the situation in Donbas is the topmost priority for the President of Ukraine and the Government. We are grateful to the EU for the extension of economic sanctions against Russia in December 2019. We are also counting on the EU support in the protection of Ukrainian citizens from the temporary occupied territories of Crimea and Donbas from systematic violation of human rights. The collateral punitive measure allows increasing pressure on the occupation authorities."

After that, the parties started the discussion of the sectoral cooperation between Ukraine and the EU.

"The main goals that Ukraine is planning to achieve in 2020 are as follows: to deepen sectoral integration with the EU in the energy and digital markets, to strengthen customs cooperation, expand and streamline trade, and to make Ukraine an integral part of the European Green Deal," said the Head of the Ukrainian Government.

According to the Prime Minister, Ukraine seeks to agree on concrete steps with the EU in order to boost bilateral trade. "We have identified as a core direction of our work to be the signing of the ACAA Agreement, the so-called industrial visa regime. We have already completed all our homework necessary for the EU assessment mission to be sent. The last necessary law was passed in December and will enter into force at the end of March. We expect the EU would find the political will to move forward."

Moreover, the PM raised the topic of updating the provisions of the EU-Ukraine Free Trade Area. "The volume of bilateral trade in goods and services for 9 months of 2019 increased by 9.6% and reached $ 39.6 billion. Ukraine is using duty-free tariff quotas for the supply of products. It is obvious that the current parameters of the FTA provisions do not correspond to the real potential of our cooperation. In view of that, Ukraine stands for updating the provisions of the trade section of the EU-Ukraine Association Agreement. This is one of the key objectives in our relations for the coming years," said Oleksiy Honcharuk.

The top officials also discussed cooperation on cybersecurity and counteraction to hybrid threats, as well as the signing of an updated European Common Aviation Area (ECAA) Agreement.

Apart from that, the parties considered the initiative of Ukraine to join the process of preparation of the European Green Deal.

"We propose to launch a structured dialogue between Ukraine and the European Union to work out the agenda under the European Green Deal," stressed Oleksiy Honcharuk.

The Head of Ukrainian Government commended the positive assessment of the progress of reforms in the report by the EU Delegation to Ukraine on the implementation of the Association Agreement, which had been published in December 2019.

He stressed that Ukraine will continue the course that was started.

"The Cabinet of Ministers is committed to prolonging an uncompromising struggle against corruption and illicit enrichment. We are pursuing a policy of reforming law enforcement agencies, in particular, restarting the Prosecutor General's Office and anti-corruption bodies, working on increasing their effectiveness. We are continuing the decentralization reform aimed at developing regional and local communities. We have improved the legislation regulating public procurement, concessions, as well as engage in strengthened the protection of intellectual property rights, in particular, with a basis on geographical indicators. All these steps undoubtedly have a positive impact on Ukraine's economic cooperation with the EU."

In the end of the meeting, the Prime Minister noted that Ukraine has high expectations of the Eastern Partnership Summit slated to be held in Brussels on 20 June this year: “Clear goals for cooperation between the EU and associated partners need to be defined. In this regard, we appeal to the EU with a request to support the joint initiative of Ukraine, Georgia and Moldova to launch an enhanced cooperation format with associated partners in the Eastern Partnership framework."