Based on the results of 2020, Ukrenergo has fully completed the data acquisition and preparation for building a mathematical model of the Ukrainian power system and studying its static and dynamic stability during synchronous operation with the European power system.

The Consortium confirmed the data sufficiency and, according to the Service Contract concluded with Ukrenergo in 2019, in the second half of 2021 it should complete static and dynamic stability studies of the power system and determine the technical possibility of the synchronous operation of the IPS of Ukraine with the ENTSO-E Continental Europe power system.

To collect this data, in August–October 2020, Ukrenergo, NNEGC Energoatom and representatives of ENTSO-E performed joint testing of turbine generator excitation systems at four NPP units (Unit 2 of Rivnenska NPP,  Unit 1 of Zaporizka NPP, and Units 1 and 3 of South–Ukraine NPP). Before that, in 2019, eleven power units of TPPs, CHPPs and HPPs were tested for the automatic load frequency control and the automatic voltage and reactive power control, the test results were also provided to the Consortium.

Such tests and further modeling are conducted with the support of the USAID Energy Security Project and the United States Energy Association (USEA), which assisted in engaging the international consultants who have experience in synchronizing power systems of other countries with the ENTSO-E, and in obtaining the necessary funding.

In addition, in 2020, the Catalogue of Measures for the Integration of the IPS of Ukraine into ENTSO-E was updated in accordance with the requirements of the EU network codes and ENTSO-E’s Synchronous Area Framework Agreement (SAFA), which replaced the earlier Operation Handbook (a collection of rules and recommendations for the operation of ENTSO-E network).

Also, in the run-up to the IPS of Ukraine synchronization with ENTSO-E, in 2020 Ukrenergo implemented many projects for construction and rehabilitation of power grids to improve the resilience of power supply to border areas and the operation of interconnectors. The key project was the completion of construction and connection to the grid of the 500 kV Kreminska substation providing a reliable power supply to consumers in the north of Luhansk region, including after disconnecting the IPS of Ukraine from the power systems of Russia and Belarus and during the synchronous operation with ENTSO-E. Rehabilitation of interstate power lines with the construction of fibre-optic communication lines (FOCL) is completed to build high-speed channels for the technological data transmission in the areas up to the state border of Ukraine:

Rehabilitation of the 400 kV Mukacheve substation also continued, which is a key substation for ensuring electricity exchanges with ENTSO-E at the Burshtyn TPP Island.

Construction of the OHL 750 kV Zaporizka NPP—Kakhovska is completed and the line is put into operation lifting the power output restrictions off Zaporizka NPP. As a result, the IPS of Ukraine received an additional 700 MW of the NPP capacity. 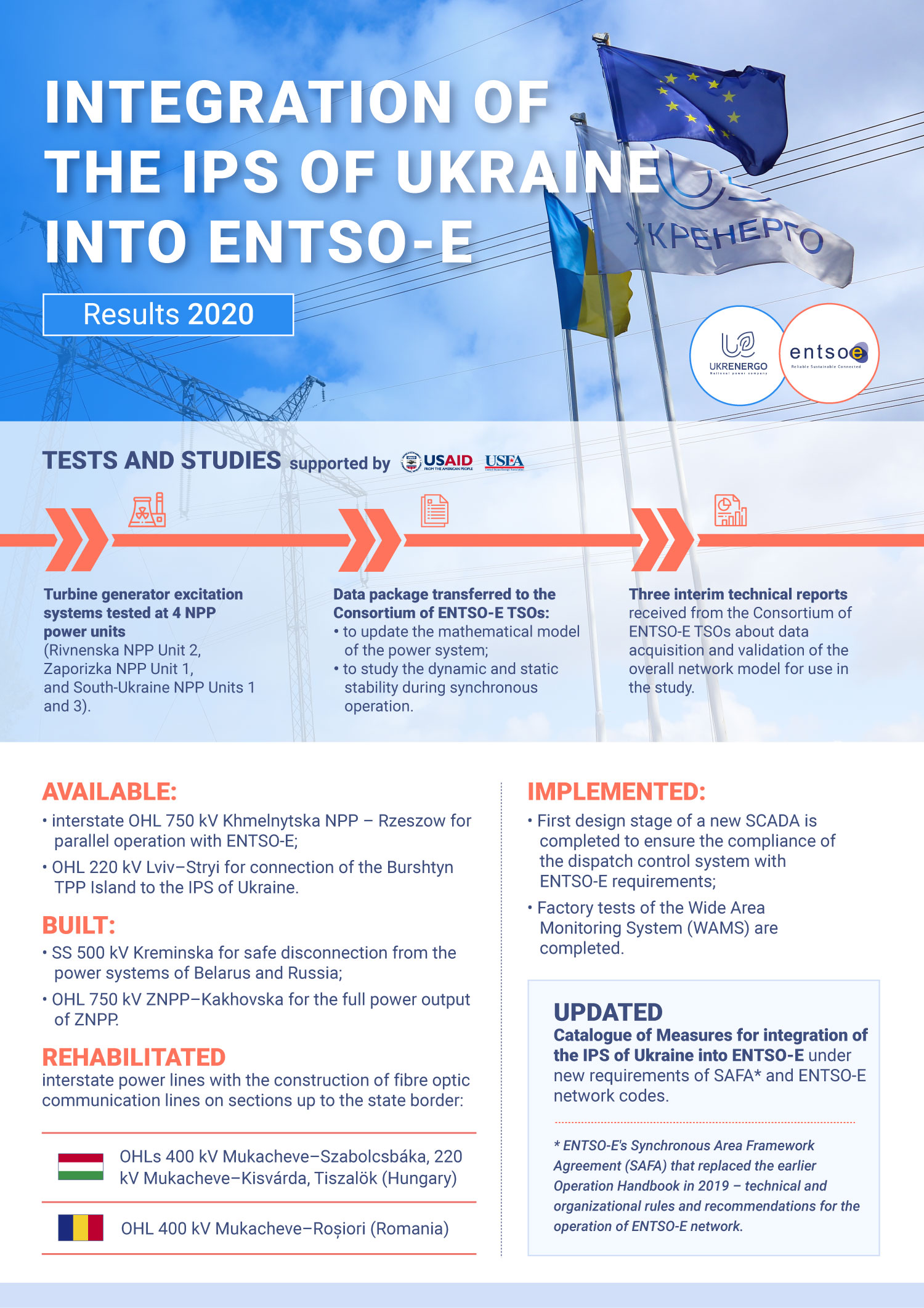 To modernize the dispatch control system, the Wide Area Monitoring System (WAMS) was developed and passed factory acceptance testing; the system implementation will increase the reliability and security of the power system. For its development, Ukrenergo engaged Grid Solution SAS (USA), a subsidiary of General Electric Corporation.

Jointly with Siemens Ukraine, Ukrenergo has completed the first stage of designing a new Supervisory Control And Data Acquisition system (SCADA), which will facilitate a higher quality of dispatch control in the IPS of Ukraine thus ensuring a high level of information protection and compliance with ENTSO-E’s requirements.

Another prerequisite for the integration of the IPS of Ukraine into ENTSO-E is the up-to-date operational agreements and the agreements on mutual emergency assistance between Ukrenergo and neighbouring European TSOs. 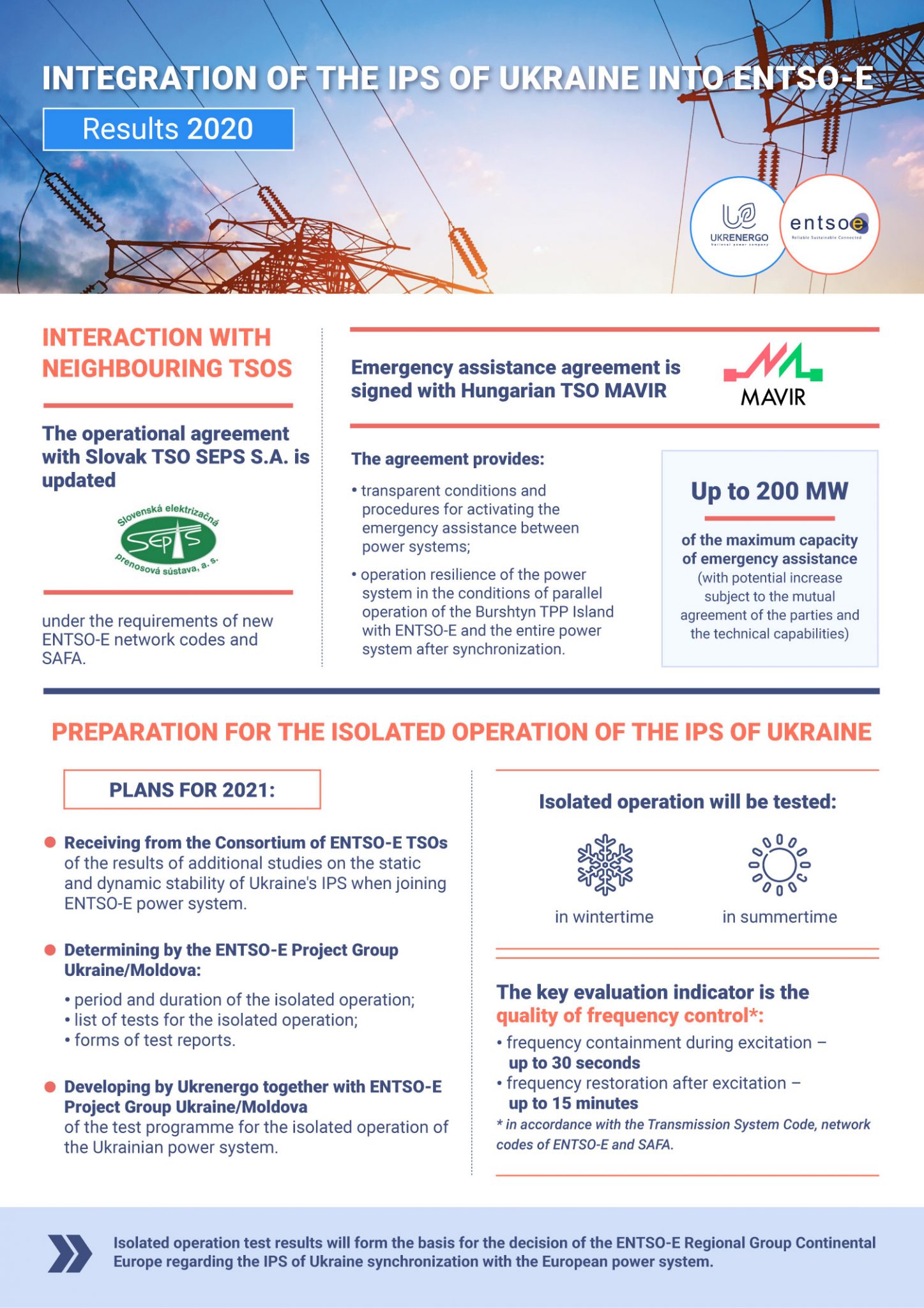