This is reported by the Ministry of Infrastructure of Ukraine. 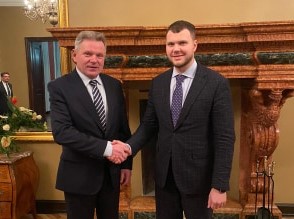 The Minister of Infrastructure of Ukraine Vladyslav Kryklii and the Minister of Transport and Communications of the Republic of Lithuania Jaroslav Narkevič discussed the state and prospects of the development of Ukrainian-Lithuanian cooperation in the field of infrastructure and joint participation in international logistics projects, as well as the increase of cargo flows. The bilateral meeting took place within the framework of  the International Conference "Europe of the Carpathians" on February 21-22, 2020 in Krasiczyn, Poland.

"The Republic of Lithuania is a strategic partner of Ukraine in the issues of the upgrading of national infrastructure and the realization of transit potential in the Black Sea - Baltic Sea direction. Presently, the cooperation between Ukraine and Lithuania in the field of transport infrastructure is developing in the ascending line, including in the field of international freight transportation by rail. The Viking Combined Train and Containerships Train are critical international logistics projects, the successful implementation of which opens up the prospect of attracting additional freight traffic to both countries," noted Vladyslav Kryklii.

The Minister of Infrastructure of Ukraine informed that the volume of container transportation within the Viking combined transport train in January 2020 had increased by 21% compared to the similar period of 2019. At the same time, the work is underway to organize container transportation within the Containerships train connecting Lithuania - Belarus – Ukraine in both directions.

The Minister of Transport and Communications of the Republic of Lithuania Jaroslav Narkevič noted the importance of further successful cooperation in the field of transport infrastructure for the Ukrainian-Lithuanian economic relations and reaffirmed the commitment to develop and deepen bilateral relations.